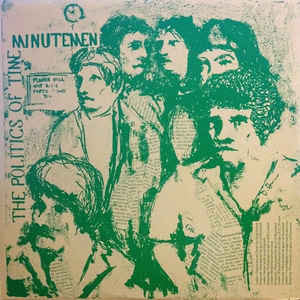 BESIDES MAKING names for themselves in local rock clubs and in the hearts of the police and the media, the Southland's hard-core punk bands have ...

Through Time With The Minutemen

OFTEN THE mention of a band will bring a visual and/or sonic image to the tip of one's lobe. The words 'Mau Mau' are spake ...

The Minutemen: Buzz Or Howl Under The Influence Of Heat (SST)

CIVIL DEFENSE QUIZ: ARE YOU PREPARED?What should you do in case of a sudden dropping of a nuclear weapon on your neighborhood? A) Grab ...

The Minutemen: Double Nickels On The Dime (SST double — US import)

The jazz-power-punk trio from San Pedro is trying its damnedest to sell out — sort of. ...

FATE SUCKS. And this this is not meant to be read in the Bob Christgau suck-is-good meaning of the word either. ...

ALTHOUGH YOU'VE really been the leader on most of your band projects since the Minutemen, playing bass almost connotes the term "sideman." ...

Bassist Mike Watt remembers his days in one of THE best rock bands – punk or otherwise – of the '80s. ...

The Minutemen: Men At Work