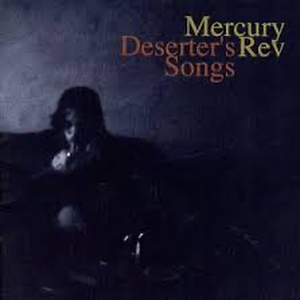 ON MAY 28, 1998, Jonathan Donahue and Sean "Grasshopper" of Mercury Rev sat rather dejectedly in a diner in Woodstock, New York, and talked about ...

On the eve of the album's release and success, Jonathan Donahue and Sean "Grasshopper" Mackowiak talk about it's creation, and look back at their struggles since the band's formation.

Jonathan Donahue and Jeff Mercel talk about band members past and present, and working with producers and arrangers such as Jack Nitzsche and Tony Visconti, plus their very own Dave Fridmann

AT LAST, one of those rare records that revolve along once in a blooming moon and have something new to struggle to say. You have ...

IT SEEMS LIKE A SMALL ETERNITY since indie America last puked up a truly ear-boggling band. The innovators of the late Eighties have become a ...

MERCURY REV's debut album has been hailed as one of the albums of the year. SIMON REYNOLDS talks to the band in New York about ...

Mercury Rev: Nice Merc If You Can Get It

THE FRIDAY afternoon rendezvous with Mercury Rev isn't quite going as planned. Police have cordoned off a large stretch of Harrow Road, West London because ...

AFTER THE EXPLOSIVE success of Nirvana last year, and the ensuing breakthrough by Pearl Jam and the Red Hot Chili Peppers, alternative rock is now ...

PASSING THROUGH San Francisco (the fourth stop on the tour) last Tuesday, Lollapalooza '93 showed signs of going to seed: the electronic billboard above the ...

THE DECOMMISSIONED DISCO dungeon that is LA2 is hardly the best place to see a group like The High Llamas. ...

MERCURY REV, one of the great if most overlooked American groups of the 1990s, are finally releasing a new album, their first for V2 Records. ...

NAMED AFTER Greil Marcus's evocative description of The Band's early albums, this latest offering from Mercury Rev is, by some distance, the best pop record ...

THE FOURTH ALBUM from the US six-piece who now make their home in America's Catskill Mountains. In last month's Select Ed Chemical Brother described Deserter's ...

HERETOFORE, MERCURY Rev have trodden that fine line between order and chaos with a, shall we say, idiosyncratic sense of equilibrium. Part of the appeal ...

HOW MANY BANDS ARE THERE who have made their best records after losing their lead singer? Whoever said "Marillion", go and sit in the corner, ...

IF YOU'VE chanced upon the term 'post-rock' and wondered what it meant, refer to Mercury Rev, who — at a guess — are the very ...

THAT MERCURY Rev have not only survived a turbulent decade but emerged from it as the alterno-rock world's darlings and champions is heroic, funny and ...

HERE'S A TRACK worth savoring: Veteran modern-rock band collaborates with Chemical Brothers and incorporates into their music bowed saw, arching melodies, and a gaggle of ...

Mercury Rev on the Other Side

NOT SINCE Joy Division turned into New Order has a band coped as well as Mercury Rev with losing its lead singer. But given that ...

TWO AND A half years ago, American mavericks Mercury Rev thought their career was pretty much over. For the band's two Catskills-based mainstays – singer/guitarist ...

Mercury Rev: All Is Dream (V2)

THIS IS AN AFTER record in all senses: after loving the highs and lows and then learning to disavow that love, after going through the ...

Mercury Rev: Dream Of A Lifetime

"WE WERE NEVER interested in placing ourselves, in saying that we were a band that started in the late Eighties and were the musical emissaries ...

RBP: What difference did it make working in your own studio for the first time? ...

Follow-up to 2001's All Is Dream, recorded in the band's own Kingston studio by the core Rev trio of Jonathan Donahue, Grasshopper and Jeff Mercel. ...

FOR MUCH of their career – certainly since they began exerting a modicum of discipline over their experimental leanings – Mercury Rev have seemed to ...

After years of chaos and in-fighting, Mercury Rev are back on track. They tell Mike Barnes how they reinvented their music — and themselves ...

TEN YEARS after Deserter's Songs became a gorgeous Americana classic, Mercury Rev have made another masterpiece. ...

Report and Interview by James Medd, The Word, June 2011

Mercury Rev's masterpiece was inspired by an orchestral record of Rip Van Winkle from childhood. Deserter's Songs has just reawaken. ...

A COUPLE ARE slow-dancing next to the ladies' loos, moony smiles on their faces. Three similarly-minded women float out of the bathroom, swaying their hands ...