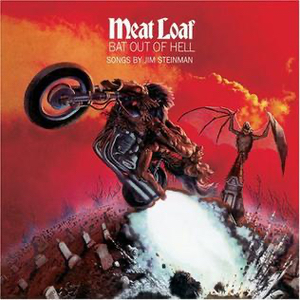 THEY'VE ASKED me to make this as short as the Loaf in question is large – but there’s a painful amount to be said. The ...

Ingredients:Meat Loaf (around 250lbs) from Dallas, Texas; lead singer with Ted Nugent on platinum album Free For All; monster-singer Eddie with half a brain in ...

Meat Loaf: Bat Out Of Hell

GARAGE BANDS. Despite all their virtues, and even though groups like Yes and Uriah Heep are pretty convincing arguments against technology and heavy metal respectively, ...

Meat Loaf: Bat Out Of Hell

EXCESS AND incongruity seem to be the key factors at work here. An abundance of diverse stylistic elements piledriven and packed high into what must ...

CLIFF WHITE, who thought he had a weight problem, suddenly feels emaciated. Thanks to Slender? No way. Thanks to MEAT LOAF. Say it loud, I’m ...

Blondie/Meatloaf: Meat To The Beat

AUSTIN, TX – Talk about incongruity. Here we are speeding down a Texas highway, sun blazing overhead. We're in a van, naturally – the only ...

MEAT LOAF'S Bat Out Of Hell album was unquestionably one of the rock phenomena of the last decade. And, of course, success is wonderful... but ...

MEAT 'ANYWHERE he wants to' Loaf is waxing rhapsodic once more. Who among us has not missed the grandiloquent sound of the corpuscles in his ...

ACCORDING TO MOST rock histories the late '70s were defined by punk rock and the Sex Pistols. Commercially speaking, however, the awful truth is that ...

I Ask The Questions: Meat Loaf

A DUSTY abandoned cinema in London. There are cobwebs and chandeliers. There is a large man on a balcony in a tuxedo and American tan ...

An Interview with Bruce Kulick

They met to create musical drama. After years of huge success, it ended in managerial rancour and paralysed vocal chords. ...

INSIDE THE garage of Meat Loaf's California home there is a photograph of him lying comatose on stage surrounded by paramedics, part of a framed ...

This is a transcript of Gavin's 2006 audio interview with the man mountain named "Meat". ...

OFTEN, MUSICIANS doing multiple phone interviews from a hotel room or publicist's office will try to open the door with journalists by throwing out some ...