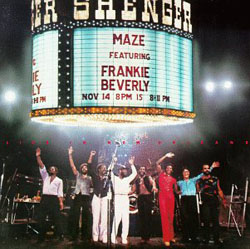 A Maze In Grace

Maze are recognised as Capitol's premier jazz band; but they really cut right across the board and sell to disco, funk, pop and rock fans ...

ALTHOUGH THIS is the seven-piece group's first album as Maze they've each paid dues in various guises for years. It shows. With one concerted effort ...

The Golden Days Of Maze

It took Maze around nine months to go gold with their debut album but their second set has equalled that feat in just six weeks ...

Maze: The 'Inspiration' Behind Maze

B&S raps to Maze leader Frankie Beverly who reveals the formula behind their 'rapid' rise to stardom. ...

ONE COOL dude, in shiny black from boots to leather baseball cap, Frankie Beverly was plainly the most surprised man in Hammersmith this week. Without ...

FRANKIE BEVERLY’S eight-man Maze could have come to Europe at any time in the last two years and met with the same phenomenal response they ...

STILL A minority soul group? Seven full houses at Hammersmith is some minority... Maze's continued absence from the crossover crew makes it easy for the ...