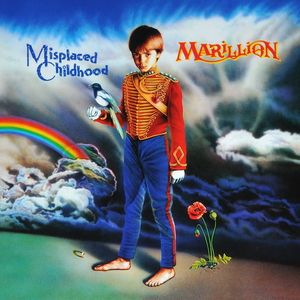 MARK MY WORDS. Critics will choke and chuckle en bleeding masse. But when action's sizzling at grass roots level, to apathetically ignore it would be ...

PREDICTABLE? Little over a year has elapsed since Marillion were first propelled into the public eye by your fave rock weekly. What with X Russell, ...

THIS HAPPY breed came to town with Black Sabbath and Thin Lizzy emblazoned on the back of their jackets. Patches, denim and undyed hair were ...

A NIGHT out for the lower sixth, dungeons and dragons players and the "progressive" rock fans time forgot. ...

Marillion: Just When You Thought It Was Safe To Go Back Into The Water

Along comes megajaws FISH, big fry with heavy rockers Marillion in search off "a clash off the titans"...in other words, a confrontation with NME. Shy, ...

KINGS AND RATTS OF THE CASTLE Yes, it's that time of year when the Metal Mob gather at the shrine of Donington to pay homage to ...

IT SEEMED STRANGE that Capitol Records would spend lots of money to send me and other American journalists to England in early February to see ...

Marillion: An Interview With Pete Trewavas

MARILLION MAY BE the best-kept secret in rock. Formed in London in 1981, Marillion started out like any other young band. The band members, including ...

Marillion: How To Thrive On A Fish-Free Diet

Profile and Interview by Stephen Dalton, The Times, 21 April 2007

THERE ARE no goblins guarding the gates to Marillion's secret lair in the rolling depths of Middle England. No cackling old crones casting spells on ...