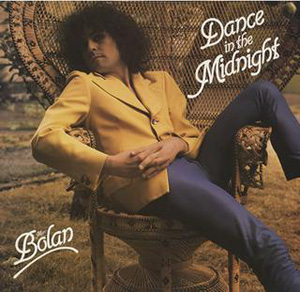 BEHIND EVERY success story there’s a team of guitars. Marc Bolan decided to give his chosen few a taste of the publicity he’s been getting ...

The Cosmic Dancer: The Short, Brilliant Ride of Marc Bolan

IT IS LONDON, JANUARY 1970. A new pop decade has begun, and two of its budding stars are huddled together at the Trident recording studio, ...

Bolan looks back at Tyrannosaurus Rex and the British underground scene; turning electric and the Beard of Stars album; 'Ride a White Swan'; and ruminates on glitter, image and stardom.

Marc on life on the road, rock'n'roll literature, his image and clothes, guitars, "chicks", Elvis and a whole lot more

The T. Rex frontman talks about his current tour with the Damned, his new album Dandy in the Underworld, and about his (sadly to be unfulfilled) future plans.

Marc Bolan: Knit Yourself A Pop Singer — Marc and Mike Will Tell You How

Report and Interview by Maureen Cleave, The Evening Standard, 23 October 1965

HUMILITY AMONG POP SINGERS used to be all the rage. "Mr. Presley," the interviewer would ask, "is it to luck or to talent that you ...

AT THE DAWN of Britain's history Marc Bolan was a bard; in 1956 he served in the 2 I's coffee house to the skiffling rhythms ...

Marc Bolan: Energy Is What It's All About

CAMOUFLAGED WELL enough to stand unnoticed in front of a rainbow, Marc Bolan sat crosslegged on his sofa and explained that "too much" had happened ...

Marc Bolan: A Weird Kid With No Friends

The following interview with Marc Bolan took place in a restaurant near Little Venice in London. Originally the meeting was to have taken place at ...

CAROLINE BOUCHER takes a bleary, cross-eyed view of Marc Bolan who started life as a Tooting Mod, pro­gressed to a flower child, bopped as an ...

Ringo: Apple to the Core

RINGO WAS always supposed to be like that empty-headed klutz who followed Peter Sellers everywhere in the Magic Christian — a good-humoured and honourable Tonto-figure ...

Why Marc Won't Be Giving Up

DESPITE the critical savaging that Marc Bolan regularly receives – he ain't gonna do a Jethro Tull and give up. Marc was accused of being ...

LONDON — THE man who put the bump and grind back into British pop music was a few minutes late arriving at his West End ...

MARC BOLAN is a star. Still. However much heavy water has passed under the bridge of rock and roll sighs, Mr B. commands respect. And ...

I WAS HOPING the spangled dwarf was going to pull off something approaching musical competence just so as I could do my small bit to ...

Fashion: The Politics of Flash

NICK KENT traces the Rise and Fall of The Satin Jacket...and generally walks it like he talks it into the land of 'Rock Chic.' ...

EARLY IN 1972, Marc Bolan and T. Rex were the biggest, bestest and baddest rock band in England. Every one of their singles shot instantly ...

A MYSTERIOIUS lack of bubble seems to be affecting Master Marc Bolan's latest offering, the Zip Gun Boogie, as it is known to those who ...

Marc Bolan: Past, Present, and Future

IT'S A WEEKDAY night in New Jersey and there's another school day to face tomorrow. Yet the Joint in the Woods is packed to the ...

Gloria Jones: Keeping Up With The Joneses

GLORIA JONES is the sultry lady sprawled across the sheets who screams through T. Rex's 'Get It On'. Very Tina Turner, and judging from all ...

Yep, Here we go again. But this time it promises to be different. BOLAN MARC TWO makes his come-back on tour with The Damned, and ...

Bowie and Bolan Get It On

"OH THAT'S REALLY Polaroid! You've gotta keep the ending!" David Bowie rocked with laughter and Marc Bolan wiped away the tears that had threatened to ...

Even people who didn't care for his records acknowledged his charisma ...

WHAT WERE you doing on the morning of September 16 this year? Were you, like me, numb with the shock of hearing that Marc Bolan ...

As Fans Worship At The Tree Where Bolan Died... T. Rextacy lives

THERE'S ONE guaranteed way to make sure any party is a dancing success — keep playing T. Rex hits. ...

A Wizard, A True Star

INDEPENDENT TELEVISION are currently repeating five shows from the three year old Marc series. Marc Bolan was star in and presenter of a pop show ...

The NME Consumers' Guide To Marc Bolan, part 2: The Rise And Fall Of Bolanmania

BOLAN WENT electric and it was deemed, astoundingly, that he'd 'sold out'. For wanting to reach young people with vibrant pop music at a time ...

Retrospective and Interview by Deanne Pearson, The Face, October 1981

Original Mod, prototype New Romantic... uhmm... but that's another story. This one's about the people trying to keep the Bolan legend alive. Second Coming of ...

"THE OTHER day I was discussing doing a new kind of record deal for the States. The record companies are going to hate it, but ...

PUTTING MARC BOLAN into any kind of historical perspective is still no easy matter, even though 17 years have passed since his death on Friday, ...

Why the frightening prospect of a full-scale Glam revival fills David Stubbs with dread… ...

"Catch A Bright Star And Place It On Your Forehead": The Rise of Marc Bolan

An extract from Bolan: The Rise And Fall Of A 20th Century Superstar by Mark Paytress, first published by Omnibus Press in 2002. (378pp, currently ...

IT'S BEEN SAID THAT IN 1967 MANAGER SIMON Napier-Bell served Marc Bolan with an ultimatum: join The Yardbirds or John's Children. The very idea of ...

IN DECEMBER 1967 The Observer devoted a large portion of its Sunday Colour Supplement to the London Underground. Complete with obligatory hip-speak glossary (an "A ...

IT CAN'T have been easy choosing the alliterative lineup for the sub-title of this rock'n'roll memoir. After Phil Spector, Tony Visconti is probably the most ...

Child of the Revolution: Tony Visconti: The Autobiography: Bowie, Bolan And The Brooklyn Boy (Harper Collins) ****

A life in music, rich in chemical romances, bickering stars and some wonderful work, is recounted with great dignity, says Mark Paytress ...

THERE IS ONLY one Starman in the room right now and his name is David Bowie. Flying high after his Top 5 astral novelty hit ...

Hippie food in rundown Notting Hill in the early '70s. It was hardly glam… ...

AFTER DEFINING studies of post-punk (Rip It Up & Start Again) and nostalgia (Retromania), Simon Reynolds turns his gaze to glam in all its glory. ...