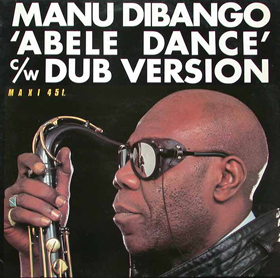 MANU DIBANGO'S appearance at the Apollo was the capper for a frenzied week of concert-going in New York and the East Coast. ...

'OUR LATIN THING' PLAYS AT STADIUM 30,000 See Fania All Stars and Others at Second Base ...

THIS IS the best soul dance record in years. It cuts directly against the grain of most black music today, which strives for that sophisticated, ...

THINGS HAVEN'T improved much in the last few weeks. The Apollo, the main showcase for black talent in the New York area, continues to run ...

Manu: Breaking Out of Africa

Manu Dibango, No. 1 in Africa, has finally broken through in America. Robert Partridge met him in Paris... ...

HIS FRIENDS call him Dibbs but to the rest of the world his name is Manu Dibango, and he is the creator of one of ...

READING THE music papers in mid-'76, I'd suspected that the touted wave of punk groups resembled nothing so extraordinary as a cross between zealous youth ...

IT TAKES TENOR TO TANGO ...

IN MUCH the same way that reggae ultimately required the charismatic presence of Bob Marley to give it international focus, the Modern Music of Africa ...

GLOBAL MUSIC often works best on the dance floor where, free from ghetto-izing labels and strict radio formats, it can cross over and capture the ...