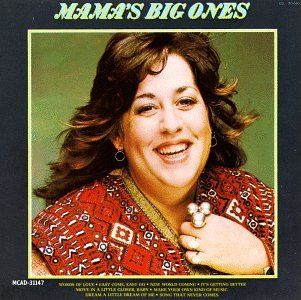 THE MEETING of the Century has finally taken place. Yes, the Large Bird from America has finally made contact with the Chief Beatle of Blightyland ...

SOUTHAMPTON — When the liner France docked at Southampton on Thursday, October 5, Mama Cass Elliot was involved in a series of fantastic quayside incidents ...

THE LATEST episode in the Mama's and Papa's will-they-split-or-won't-they saga is a single by mammoth Mama Cass which seems certain to be a monster hit. ...

After The Split With The Mamas & Papas, Mama Cass' Broke, But Happy!

A ROARING log fire and its reflection in the pine-panelled walls gave the whole room a cosy reddish glow all ankle-deep in carpet and large ...

CASS'S FIRST SOLO ALBUM for her new company shows that the lady has always had much more to offer in terms of phrasing and feel ...

Mama Cass: Why 'Unprofessional' Mamas, Papas Had To Break Up

IN TOWN TO RECORD HURRICANE'S HIT, AND KNOCKED AND ROBBED IN A LONDON STORE, MAMA CASS TALKS TO FRED DELLAR ...

Recalling the '60s With Mama Michelle

I DON'T CARE how many superannuated Peter Noone groupies rushed the stage, Richard Nader's '60s nostalgia night was still a bomb, with a total lack ...

see also Mamas and The Papas, The