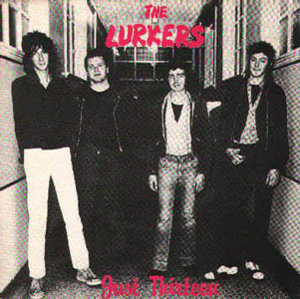 The Lurkers: Attack Of The Distortion People

ALLOW ME TO present The Lurkers, whose enlightened adherence to the golden rule of "Three Chords, Three Verses, Three Minutes" definitely fingers them as the ...

YOU KNOW THAT immense sense of relief that hits you when you get through the one album in every twenty or so that you might ...

Generation X, The Saints, The Lurkers, The Valves: The Roundhouse, London

The Lurkers: Strange Daze In Sheffield (Or Maybe Halifax)

SOMEONE MUST have been spreading lies about me, for without doing anything wrong I was told to write a feature about The Lurkers. The Man ...

Beggars Banquet: Where Taste is a Dirty Word

Nick Austin and Martin Mills are the perpetrators of Duffo, Ivor Biggun and the Lurkers. They may have traded in their Jags for Cortinas. but ...

The Lurkers, The Wall: Wirrina, Peterborough

Lurkers out in the dark ...

Beggars Banquet: Laughing All The Way To The Banquet

FROM SECOND-HAND RECORD SHOP TO NUMBER ONE SINGLE AND ALBUM. THE STORY OF BEGGARS BANQUET ...

The Lurkers: The Lurk Of Love

THE BLOKE who spends his life writing things like 'Let's Lurk' and 'Lewisham Lurkers' over every available wall on my estate, and who's probably single-handedly ...