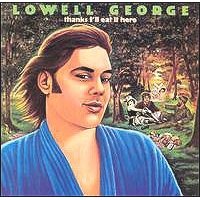 ...with contributions from Lowell George and Pete Frame. ...

WASHINGTON DC. — "When we really get going we can play music as complex as Weather Report or Herbie Hancock," Little Feat pianist Bill Payne ...

Fear and Loathing in Little Feat?

LOWELL GEORGE IS NOT HAPPY. BILL PAYNE IS BEING DIPLOMATIC. THRILLS IS ALL EARS. ...

Lowell George: A Feat Of His Own

FOR YEARS, fans of Little Feat have heard rumours about a solo album being prepared by Lowell George, the group's main songwriter, lead guitarist and ...

WITH HIS powerfully sentient vocals, frequently marrow-moving guitar-work and considerable song-writing capacity, it wouldn't be doing his fellow musicians too much of an injustice to ...

THE REAL name of this album is 'Thank You! I'll Eat It Here!' which was the original name of Little Feat's Sailin' Shoes and applied, ...

THE IMMINENT RELEASE or this, the first solo LP by Little Feat mainstay Lowell George, was a rumor in good standing among certain segments of ...

IT'S EERIE and disturbing news to learn about the death of someone with whom you had enjoyed a long and enjoyable conversation just a few ...

LOWELL GEORGE didn't so much leave Little Feat as fade out of it, gradually reducing his writing for the group and his participation in the ...

Of all the hundreds of white boys who fell in love with the blues, few used the idiom with such brilliance as Lowell George. Singer, ...

GRAHAM PARKER'S salute to Lowell George at the close of his Santa Monica Civic concert last weekend symbolized the respect the rock community held for ...

"I FEEL LIKE I'm in an old MGM photo," cracked Bonnie Raitt as she and the other participants in tonight's "Tribute to Lowell George" concert ...

I WAS FORTUNATE enough to meet Lowell George close on 20 years ago. He was a charming great bear-like man rumpled and a little worse ...

THE EAGLES SOLD more records and Steely Dan went down better with intellectuals, but the best American band of the 1970s was Little Feat, led ...

Retrospective by Michael Simmons, MOJO, May 2010