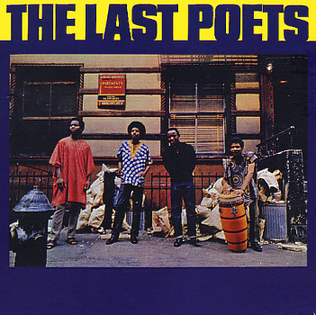 Thoughts... and Music: The Last Poets

AS EDITOR of Blues & Soul, I have always done my personal utmost to concentrate on the musical content of our music and the artists ...

There's a new, young breed of black singers coming up — a breed that is aware of the roots but doesn't get into the funky-jive-fingerpop-boogaloo ...

THIS ALBUM has had tremendous success in America over the last year and practically become the testament of the Black American. It's not hard to ...

THE LAST Poets have enjoyed success in the States via two albums, The Last Poets and This Is Madness, both on the Douglas label. However, ...

Wanda Robinson: Black Ivory; Nikki Giovanni: Truth Is On Its Way; The Last Poets: This Is Madness

Review by Sheila Weller, Fusion, May 1972

THE BLACK cultural tradition has always depended for its survival on oral, rather than written, communication: from the chants of tribal Africa to the folk-tales ...

CHANCES OF seeing The Last Poets I would have thought were only marginally better than those of seeing The Beatles. ...

Wake Up Limeys, The Last Poets Are Among You

Kidnapped heiress Patti Hearst is said to have listened to him incessantly during her captivity and the hip-hop crowd regard him as a guru. His ...

Last Poets: The First And Lost Poets Of Rap

THE LAST POETS were the first rappers — the voice of ghetto anger and fiery jazzoetry. Their "exile" over, they're back with a new LP ...

WORDS FLY LIKE bullets from a scatter gun. They call Jalal Nurridin the "Godfather of Rap", but he's much more than that. ...

The Last Poets: Bill Laswell on how to Produce A Holy Terror

USUALLY, THE relationship between words and music on a recording puts the music first and the words second. But when Bill Laswell began work on ...

A LONG-RUNNING saga of legitimacy has embroiled the Last Poets in a situation that is rapidly echoing the sentiments of one of their own poems, ...

The Last Poets: Progenitors of Rap

Perhaps it was the Vietnam War dragging on, nightly television footage of bombed villages, body bags and helicopters dropping flaming glue on Vietnamese farmers or ...

After The Party: Music and the Black Panthers

Retrospective and Interview by Dorian Lynskey, The Guardian, 2 September 2010

The Last Poets: Waiting For The Revolution

From the volatile streets of Harlem in the late '60s, THE LAST POETS were among the earliest voices of radical black youth in America. With ...