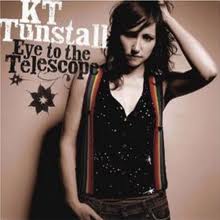 KT Tunstall: Eye To The Telescope

ANYONE WHO SAW the Scottish singer's TV debut, performing 'Black Horse And The Cherry Tree' on Later... With Jools Holland can't fail to have been ...

Our correspondent casts a weather eye over the fleet of female singer-songwriters floating their sonic pedalos in the wake of Dido's mighty MOR steamship ...

Profile and Interview by Jaan Uhelszki, Harp, May 2006

KT TUNSTALL knew she was meant for big things. "I just always thought that I was the golden child," the Scottish chanteuse explains, with a ...

ON THE DAY that her second album, Drastic Fantastic, went on sale, KT Tunstall played a semi-secret pre-tour warm-up gig at Wilton's, in east London. ...

THE KT TUNSTALL of Tiger Suit is tougher, louder, and more electronically endowed than the KT Tunstall of its poppy predecessor, 2007's Drastic Fantastic, and ...

A Round With KT Tunstall

She's the eco-conscious singer-songwriter who loves Professor Brian Cox and avoids being "a champion wanker". But, be afraid: this self-confessed "single malt girl" can drink ...

A nice walk with a rock star — KT Tunstall

Interview by John Lewis, Do Not Disturb, Spring 2011

NOWADAYS, SINGER-SONGWRITER KT Tunstall spends a lot of time in and out of hotel rooms, touring every continent on earth. She's one of the UK's ...

THE LAST TIME we heard from KT Tunstall, she was struggling with the double whammy of a broken marriage and the death of her father. ...