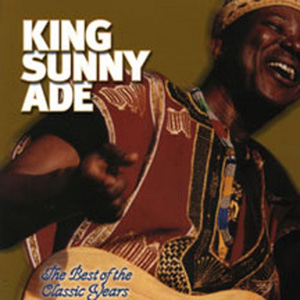 Nigerian giant Adé talks about juju music, tribalism and politics, the talking drum and much more.

IT HAS ALREADY been wisely stated elsewhere that any thoughts of tribal ceremony soundtracks brought direct from the bush by intrepid white David Fanshawe types ...

King Sunny Ade: Sunny Side Of The Beat

IN A THREADBARE year for outstanding pop records, Synchro System is something to set excitement aflame – a torch song for the powers of rhythm. ...

THERE'S ONLY one thing wrong with King Sunny Ade And His African Beats: they make nearly everything else sound drab and mean-spirited. But that malaise ...

APPROACHING SUNNY ADE'S juju music from a Western pop perspective is difficult, because his creative objective is a smooth flow with nothing much happening in ...

AFTER EXHAUSTING the musical possibilities of rhythm and blues over the past 30 years, pop music is searching for ways to rejuvenate itself. The Police ...

HB: You are doing something most American bands wouldn't think off, touring the country with a 20 odd person entourage. ...