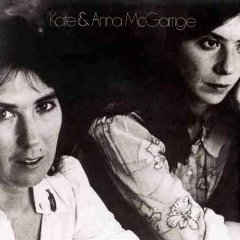 "THERE’S A song of Kate McGarrigle’s, which Maria Muldaur sang on her first LP, called ‘Work Song’, which is about all the old songs that ...

UNTIL DEMAND forced them to issue that classic Maria Muldaur album two years ago Warner Bros. had always shown a marked reluctance to promote its ...

Like Dylan, the Band and Randy Newman, the songs of Kate and Anna McGarrigle recall America in its pioneer days. With a fine debut album ...

BY THE manner in which they presented their London debut last night, one imagines that Kate and Anna McGarrigle spent much of their childhood around ...

And yet more folksiness as Kate & Anna McGarrigle BLITZ OVER LONDON ...

Kate And Anna McGarrigle: Kiss Me Till My Mouth Gets Numb

The harrowing tale of two sisters who narrowly missed getting typecast as nuns when their real thing is foolin’ around in bathrooms... Seriously though, we ...

THE DIFFICULTIES of following an album not simply outstanding but universally acclaimed as such are only too apparent. Even a demonstrably first-class work could not ...

IT WAS once my considerable misfortune to own a part-time job, forced on me by financial hardship, that required knocking on people's doors inviting them ...

THERE ARE three sisters altogether. Jane, the eldest, who sometimes plays organ on her sisters' records, lives a happily married life in California, and the ...

Kate and Anna McGarrigle: Love Over and Over (Polydor) ***½

WHILE THEIR most compelling virtue is their lovely vocal interplay, Kate and Anna McGarrigle have always been careful to use classy session players. As a ...

The McGarrigle Sisters: File Under…?

LIFE IS SHORT with few guarantees. But here's one – Kate and Anna McGarrigle will always make wonderful folk music. If only they weren't so ...

Folk singer and songwriter at the heart of an innovative music-making family ...

THERE ARE TWO words that have always epitomised the voice of Kate McGarrigle for me – they came in a Rolling Stone review that followed ...

Obituary by Nicholas Jennings, The Globe and Mail, 20 January 2010

FOLK SINGER KATE McGarrigle left a deep musical legacy both in recordings with her older sister Anna McGarrigle and in her two children, singer-songwriters Rufus ...