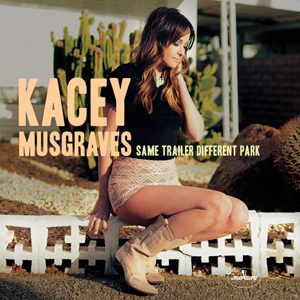 KACEY MUSGRAVES, 23, sings unvarnished truths about being hooked on "Mary Kay, Mary Jane and Mary down the block," but she's maintained the sunniness that ...

"I'VE HAD MY PICTURE MADE with Willie Nelson/Stayed in a hotel with a pool," Kacey Musgraves trills early on Pageant Material, "Slept in a room ...

The Ladies Used to Love Outlaws, Now The Ladies Are Outlaws

"LADIES LOVE OUTLAWS," Waylon Jennings sang in 1972, "like babies love stray dogs." Jennings was boasting. He presented himself as a desperado and would soon ...

THREE DAYS before I meet Kacey Musgraves, the American country singer appears at the Royal Variety Performance in London, sharing a bill with One Direction, ...

Despite a fantastic sound from her band, the Grammy-winning star is awkward on stage as her lyrics are lost in the dry ice. ...

Kacey Musgraves, Maren Morris and the Politics of Joy

NOT MANY people in the audience at Irving Plaza in New York knew who Kacey Musgraves was when she opened there for Little Big Town ...