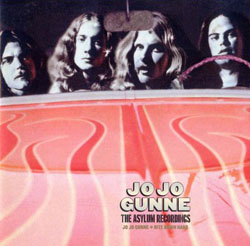 MAYBE THE auditorium's marquee had the right idea by posting "Rock Concert" for all the world to see while supplying absolutely no details whatsoever – ...

SEEING HOW it packed the Whisky to overflowing in its opening Thursday, only a fool could doubt that Jo Jo Gunne will soon he enjoying ...

PLEASE ALLOW me to introduce myself: ...

The Spirit of Jo Jo Gunne

SOME say the stench given off by their first album is just too rank to bear. Others are moved to disagree. Strong stuff, it is ...

THE FIRST word out about Jo Jo Gunne raved about their looks – "gorgeous" said those into masculine beauty. An emphasis on appearance always makes ...

AS KISS thundered onstage March 21, for the first of two shows, it was clearly a case of "hail the conquering heroes." The sold-out crowd ...