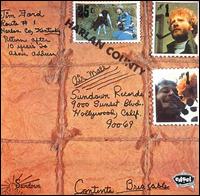 The Last Soul Man talks about his friend and collaborator Jim Ford: being introduced by Ford to Sly Stone, such great songs as 'Harry Hippie' and 'Point Of No Return', and writing songs with the man.

White Soul from the Black Hills: Whatever Happened to Jim Ford?

TWENTY YEARS AGO I drove around the American South in pursuit of something I called "country soul." By that term I meant the late '60s/early ...

Ravishing set of unheard demos from fabled US country-soul brother THE STORY OF Jim Ford is steeped in Southern myth. Revered by good buddies Bobby Womack ...