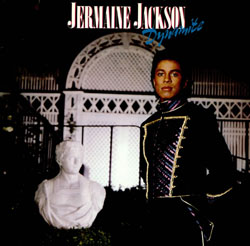 Let's Hear a Scream For the Jackson Five

Having experienced the whole J5 explosion, how are things with Jermaine Jackson since goin' out on his own? Well, seems things are pretty fine, as ...

COULD BE that marrying the boss's daughter has caused Jermaine Jackson a few problems. Not only is the boss' son-in-law expected to try that much ...

MEANWHILE, BACK at Motown... as Michael Jackson prepares to take over the cosmos with his Epic epic, big brother Jermaine launches his counterplot. ...

The hit factory calls in the new technology ...

IF MICHAEL Jackson's public persona makes him out as a bit of a dreamer, there's always enough fire in his work to add an edge ...

John Abbey reports from backstage at the opening of The Jacksons' Victory Tour, the most eagerly awaited tour for many a long year. The organisation, ...

THROUGH A series of circumstances too bizarre to recount (even here!), CREEM has become the first national publication to locate and interview the lost Jackson ...