James White and The Blacks 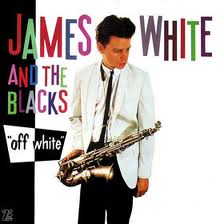 Q: Why Interview James Chance? A: Because He's There

James White and The Blacks: Off White (ZE)

JAMES CHANCE, alias James White, leader of The Contortions aka The Blacks, has been making something of a name for himself this past year or ...

James White and the Reds

A comparative study (sort of) of aggressive American nihilism and French anarchists with beer cans. IAN PENMAN adjudicates on matters moral and philosophical. ...

SOME DAYS it's fun being a real Midwesterner trying to make it in the art rackets; the powers on the good-taste-is-timely Coasts already have you ...

FLINGING THE FUNK IN YOUR FACE ...