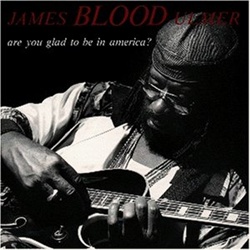 The out-there guitarist talks about his early musical life; his association with Ornette Coleman; the ups-and-downs of his Columbia Records deal, and his adoption by the New Wave clubs in New York and elsewhere.

IT WON'T be long, I guess, before someone describes James "Blood" Ulmer as "the new Hendrix", so you might as well be forewarned. ...

NOBODY EXPECTS Public Image Limited to sell massive amounts of vinyl to the American public. So to see the "Sold Out" sign on the Palladium ...

"Being poor is not because money doesn’t exist and being rich doesn’t mean you know everything. But in America, art has more to do with ...

1. A LOT OF different people are going to like Free-Lancing, the new album by James Blood Ulmer. ...

JAMES BLOOD ULMER seemed faintly bemused by it all. Sat square in his little hotel chair like some Great Panjandrum surprised by a person of ...

ULMER IS A 39-year-old guitarist who's come up thru' blues bands and organ/guitar trios, thru the Del Vikings and Dick Clark's Caravan of Stars, thru ...

NEW YORK-BASED guitarist James (Blood) Ulmer has become a cause celebre in hip jazz and rock circles over the past few years. Several Big Apple ...

A PROTÉGÉ of Ornette Coleman and disciple of Coleman's theory of harmolodics — a musical system of such devious complexity that possible only Coleman and ...

Sound and loving fury from Blood, ambling aimlessly about the stage, like a giant teddy bear who’s somehow laid his paws on a guitar. Big, ...

WITH THE unprecedented challenges of his earlier records taken up by nobody, and with his own position of fringe acclaim at a nebulous standstill, Blood ...

IF, AS IT'S often noted, a week is a long time in pop, how long is four years in avant-jazz-funk? ...

The 'Harmolodics' Of James Ulmer

When Guitars Speak: Innovations From Ulmer, Torn and Moore

IT'S EASY to understand why so many jazz and pop musicians have gravitated toward the buzzing, grinding and squealing of guitar distortion, even if those ...

THOUGH THERE'S BEEN hundreds and thousands of hotshots who vowed to take the guitar to the next level after Jimi Hendrix broke the doors open, ...

James Blood Ulmer: No Escape From the Blues

THE SEPTEMBER release of James Blood Ulmer’s No Escape From the Blues: The Electric Lady Sessions is a milestone event in this centennial Year of ...