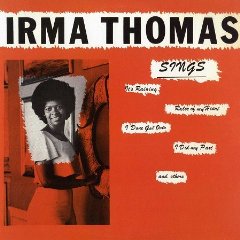 SIPPING A CUP of coffee and looking out over the wilds of Shaftesbury Avenue, it was very hard to get Irma Thomas to talk about ...

RECORDED at the 1976 New Orleans Jazz & Heritage Festival, from which a live double-album of various acts was recently reviewed by Roy Carr, this ...

IN NEW Orleans it is easier to perceive an American musical tradition than anywhere else; the city is the fount not just of jazz, but ...

Time On Her Side: Irma Thomas

IRMA THOMAS' entrance into the music business is the kind of story rock dreams are made of. ...

CHESS WAS pre-eminently a blues label and Chess was most definitely a Chicago-based label but Chess was also a hit-seeking label and that fundamental fact ...

Irma Thomas: An Audience With The Soul Queen Of New Orleans

AS HER lengthy reign as the Soul Queen of New Orleans extends into the 21st century, the great Irma Thomas continues to grow as an ...

Best of the Beat Lifetime Achievement in Music: Irma Thomas

IN 1960, ALLEN Toussaint and Irma Thomas showed up to audition at WYLD studio in New Orleans for Joe Banashak and Larry McKinley of Minit ...

Irma Thomas: Time's still on her side

NOTE: This is the complete transcript of an interview that appeared in the paper edition of Metro Times in an abridged form. ...