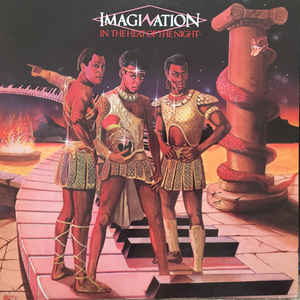 The triple-e'd front man talks about UK v US producers; his band's theatricality and image; his hatred of Apartheid; hanging out with royalty, and finds time to peddle a selection of AIDS myths.

LEEE: YOUR NAME'S Barney Rubble. How long have you been interviewing? A year? So you're young, a spring chicken?BH: Why, do I look well-seasoned? ...

Suitably softened up by his workout with four year-old Twinkle, IMAGINATION'S extrovert frontman picks himself up off the floor for an interview with LESLEY WHITE ...

Imagination: The Glam Gladiators Fight Back

AT THE BOTTOM end of London's Marylebone Road, going towards the station, you pass numerous beauty salons, the type of establishment that's emerged in many ...

Imagination: The Gospel According To John...

Leee John, that is, from Imagination. In the beginning he was a snowflake in a school play. Today he's the singer in Britain's biggest-selling black ...

THE FIRST surprise was the discovery that, although the members of Imagination may have black skins, they are not what is crudely known in the ...

Or, great headlines revisited. PAOLO HEWITT puts IMAGINATION in his typewriter and asks — are they on the way out? ...

FOR ME, the high point of the set by this precision-dancing disco collective was the moment when Leee slipped off his gold lame jacket to ...