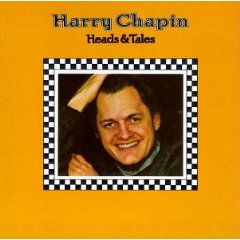 The late singer-songwriter talks about unreleased tracks recorded with Michael Nesmith; his relationship with Elektra; how hits such as 'W•O•L•D' are representative of his work, and about his stage show and relationship with his audience.

Harry Chapin Takes 'Taxi' Wherever He Can

"I NEVER REALLY drove a cab," said Harry Chapin, the filmmaker-turned folkstar, "But I do have a hack license in case of emergencies – like ...

AN AMERICAN-style interview generally means a rap over the breakfast table and it was under such circumstances that I met Harry Chapin at the Westbury ...

BY NOW IT should be deemed a case of criminal neglect that Harry Chapin's 'W.O.L.D.' is not in the top ten or even higher, because ...

Report and Interview by Chris Charlesworth, Melody Maker, 11 May 1974

SHORT STORIES is the most apt title for Harry Chapin's new album, for Chapin is not so much a singer as a storyteller, an artist ...

NEW YORK: The trouble with Harry is that he's such a goddam regular guy. The way he handles himself onstage, for instance. Like a scoutmaster, ...

HARRY CHAPIN IS probably the most novelistic of our songwriters. Using techniques most often found in prose, he has created a series of story songs, ...

HARRY CHAPIN'S hit that hits close to home came from within his own. "My wife, Sandy, had written a poem that implied I was on ...

HARRY CHAPIN, the singer who tells stories rather than sings songs, has recently moved his craft a giant leap forward with the opening of The ...

THE MORNING OF February 3rd, singer/ songwriter Harry Chapin flew to Washington D.C. from Ontario. He'd just done a concert and, having slept on the ...

HARRY CHAPIN often described himself as a "third-rate folk singer," and judging from most of the reviews he received in these pages and elsewhere, he ...