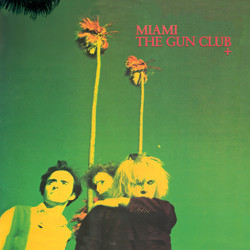 THE GUN CLUB plays for keeps. Their songs crackle like dry corpse skin turning to parchment under the caress of a rattlesnake belly. Jeffrey Lee ...

The Gun Club head honcho talks about the revolving door band membership, the Death Party EP and more, accompanied by yawns, drumming of fingers and spinning coins on the table.

THE GUN CLUB don’t give a shit. Born and bred under the scorching suns of Dallas, El Paso and (yuk yuk) Los Angeles, rifle in ...

I LOVE AMERICA. It's a land with a heart as big as all outdoors, willing to clasp to its bosom all sorts of crazies — ...

FIRST THERE was The Flesheaters, carving Americana with a lurid libido and off-colour arcana. Now the same frame of mind and music has thrown up ...

THE GUN CLUB are direct descendants of a ferociously-subversive rock 'n' roll tradition fired by the Velvet Underground and the Stooges, and most successfully embodied ...

UNDER A WIDE banner that said "Trans-Global Unity Express," the Jam played an intense 80-minute set to a half-empty Palladium. Songwriter/guitarist Paul Weller, with his ...

IN A MUSICAL world that is forever being bedevilled and picked at by the bland spirits of so called 'new pop', the emergence of a ...

The Gun Club: The Venue, London

WHILE THE new guard of British pop cultivate sophistication, artifice and detachment, the American avant garde continue to celebrate the more basic virtues of rawness ...

The Gun Club: The Venue, London

IF YOU'VE ever heard Charley Patton's 'Mississippi Boll Weavil Blues' then you'll be aware of the kind of high lonesome wail that blows through the ...

IN THE beginning Jeffrey Lee Pierce was born in Texas and raised in Los Angeles. ...

For Hire: The Gun Club

Last year Jeffery Lee Pierce was a chronic depressive and a shithead full of venom. But since then he's sorted out his personal life, and ...

NATURE ABHORS a vacuum, but Eleganza adores someone who dares to dress with panache, elan, and all the other French nouns that mean pizzazz. You might not ...

IT'S ALMOST three years to the day since I encountered the Gun Club. After the Cramps' 1980 Lyceum Show, Lux Interior introduced me to the ...

JEFFREY LEE PIERCE is the Gun Club. He writes the music, sings, plays guitar, does the talking, and since the band's rise from nowhere with ...

The Gun Club: The Birth, The Death, The Ghost (ABC)

BLOOD, BOOZE, and Host: midway through a mess of ‘Preachin’ The Blues’ on this sub-bootleg memento of pre-Fire Of Love Gun Club, Jeffrey Lee Pierce, ...

Gun Club: Idiot Savants In a Cruel and Unusual World

You know... IDIOT SAVANTS. Those people who can’t complete a simple sentence or add two and two but effortlessly create anatomically PERFECT works of art. ...

The Gun Club: I Left My Hat In San Francisco

WE CARRY OUR ANCIENT RELATIVES AROUND WITH US – ...

PRACTICALLY A FULL year after coming down hard on the Batcave quotient at the Lyceum, the Gun Club finally rolled into Scotland to prove that ...

AND SO the Gun Club was finally laid to rest. That majestic, thrashing animal with its tail in the blues, foot in the garage and ...

The Gun Club Loads Up

NEW YORK — Singer-guitarist Jeffrey Lee Pierce can't stop playing a part, but he does admit that he's one satisfied ghoul these days: "My problem ...

Rifles reloaded THE GUN CLUB are back in the battlefield. Singer JEFFREY LEE PIERCE nurses his war wounds and talks tactics with a shellshocked ROBIN ...

JEFFREY LEE PIERCE, leader of the band the Gun Club, died Sunday after surgery to treat a blood clot in his brain. He was 37. ...

AS THE guitarist and singer for the Gun Club, Jeffrey Lee Pierce unleashed the primal passion of the blues onto Los Angeles' thriving early '80s ...

AAHHRRROOOOUUUUU!!! All heads in a Chapel Hill, N.C. club jerk stageward as the frontman for L.A.'s latest punk export summons up an ear-splitting howl. Part ...

The Ballad Of Jeffrey Lee Pierce

He coulda been a contender. Instead, the Gun Club's avatar of prescient, blues-blasted voodoo rock destroyed himself in a shower of drugs and booze. Sylvie ...

THE PASSING OF Jeffrey Lee Pierce in 1996 after a brain haemorrhage robbed the music world of a true original. A wildman psychobilly blues howler ...

Profile and Interview by Ted Drozdowski, The Boston Phoenix, 14 September 2006

THE LATE 1970s were a time of ignition. Punk rock set a fuse that burned through every aspect of the arts, and the lives of ...

NOW, THE FIRST THING you should understand is that I never knew Jeffrey Lee Pierce. But I did know that same person as Jeffrey for ...

Locals Only: The Flesh Eaters and The Gun Club

NO ONE ON the L.A. scene in 1981 got enough of the version of the Flesh Eaters featured on A Minute to Pray, A Second ...