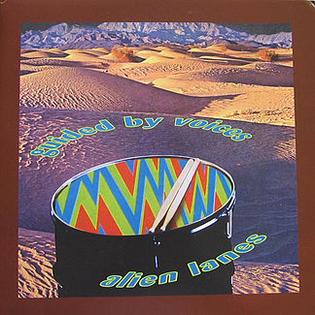 PT: WHAT DRIVES you? Is there some kind of creative force inside you just bursting to write new songs all the time? ...

LATE IN Bee Thousand, Guided by Voices singer/songwriter Robert Pollard provides a skeleton key to his remarkable music. "I am a pharmacist, prescriptions I will ...

IN AMERICA, as the focus has shifted to the classifiably indie sound of scratchy basement pop, Guided By Voices find themselves in Pavement's commercial slipstream ...

GUIDED BY Voices leader Bob Pollard is either an authentic American eccentric genius or the toppermost underachiever in pop music. Married, with two kids and ...

Guided By Voices: Do The Collapse (TVT)

GUIDED BY VOICES’ Bob Pollard has reinvented his rock’n’roll vision, trading his home recording ethos for a slick pop sound. This aesthetic change reflects other ...

Guided by Voices: Ale to the King

He's 42, his main influences are The Beatles and Genesis, and he's still putting self-proclaimed rock'n'roll animals to shame. Tom Cox shared more than a ...

ROBERT POLLARD HAS fronted slanted 'n' enchanted prog-punk bubblegum merchants Guided By Voices for two decades, and writing songs, he claims, "since I was eight ...

Putting the mystery back in rock ...

Guided By Voices: Half Smiles Of The Decomposed/Robert Pollard: Fiction Man

"THIS IS THE ballad of Guided By Voices," reflected Robert Pollard poignantly on the band's 1996 semi-official bootleg Jellyfish Reflector, introducing 'Don't Stop Now', a ...

Fading Captain: Guided by Voices Head Into The Sunset

GEARING UP FOR what will be his last tour with the band that won him his unlikely fame, Robert Pollard is in a reflective mood. ...

TONGUE PLANTED only partly in cheek, Guided By Voices' leader Bob Pollard has dubbed his group's farewell tour "Mission Accomplished: The Electrifying Conclusion", and by ...

BY THE time you read this, Robert Pollard will have pulled the plug on Guided By Voices: The band's final concert occurred on New Year's ...

Guided By Voices: Don't give up the day job

Retrospective and Interview by Stevie Chick, The Guardian, 5 January 2012

Riven by addictions and family problems, Guided By Voices' late blooming was a double-edged sword. So why, after 15 years, has the classic lineup reunited? ...