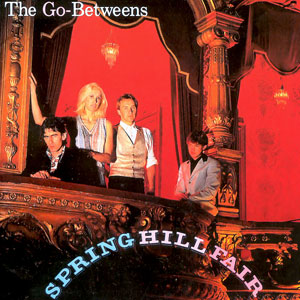 AT THE END of the day, what do good reviews really mean? In the case of the Go-Betweens, whose debut Capitol album 16 Lovers Lane ...

The Go-Betweens' co-frontman talks about the band's return to their native Australia: the contrasts between London and Sydney or Brisbane; the lack of a particularly Australian music; his dislike of the London Soho/The Face mafia, and having had enough "edge"; the new album 16 Lovers Lane; the Australian fear of indulgence and artiness, and thinking of hemispheres rather than nations.

PUBLIC IMAGE: 'Public Image' (Virgin) 'ELLO, A LOW-key re-emergence which grows on ya. I know everybody was expecting another anthem but here ya go, this ...

The Raincoats, Three Courgettes, The Go-Betweens: The Venue, London

HAVING SUCCESSFULLY thrown off the worst aspects of their twee post-punk amateurism with the release of the refreshing Odyshape last year. The Raincoats took several steps backwards ...

The Go-Betweens: The Gentle Three-Headed Monster

Treading carefully among the Go-Betweens – these Aussies bite! ...

THERE COMES a time in every upwardly mobile popster's career when he/she is faced with the almost inevitable prospect of playing the Lyceum. The ...

DON WATSON SEES THE GLINT ON THE EDGE OF THE GO-BEES' POP KNIFE ...

Ridiculous and Wonderful: The Smiths/The Go-Betweens at the Venue, London

The Go-Betweens: Mysteries of Exile

The GO-BETWEENS come from Australia, but you don't need a visa to love them. Lynden Barber suggests we drop our passport control mentalities and tune ...

The Go-Betweens: Up From Down Under

HOW TOUCHINGLY ENGLISH this all is. Outside in the late autumn Notting Hill Gate landscape shoppers shuffle through the leaves, surprised at the novelty of ...

The Go-Betweens: Past Hope, Past Care, Past Help?

I FEEL KINDA SORRY for the Go-Betweens. A lot has happened and just as little, since their first brief trip to America around Christmas time. ...

TO SUMMARISE the Go-Betweens' appeal would be a destructive exercise, because the core of their charm is a moveable feast. From the lush beauty of ...

THERE'S NOTHING quite like a love affair to shake you out of an autopilot trance and put you back in touch with your feelings; feelings ...

AS THEIR man Robert Foster notes: "There are a small group of people who like the Go‑Betweens intensely. I see the band as having good ...

A FULL decade after they released their first single, Australia's Go-Betweens have finally found a home on a major U.S. label. Presumably, with the beautiful ...

THIS IS getting a bit ridiculous y'know! For years now virtually every pop scribe in the country has been telling you, the public, how wonderful ...

IT WAS PROPHETIC that the Go-Betweens should have prepared this album, a double compilation of their greatest "hits and misses", or rather "misses and outtakes", ...

SOME BANDS just seem to outgrow their natural life through sheer influence. Something profound dictates that as their reputation accumulates people remember them as a ...

A DECADE AGO, Evan Dando was pretty much the perfect pop star. He was a tousle-haired, scatterbrained blond who posed for teen magazines with his ...

ROBERT FORSTER and Grant McLennan are my kind of guys. Thoughtful, wary, bemused, these are men who have known love and lost it, kept their ...

Prehistoric Sounds: In Search of an Australian Rock'n'Roll

I'VE STARTED writing this story a hundred different ways and every time I think I might be getting somewhere I end up stumbling across some ...

THERE'S NOTHING FOOLISH about the Go-Betweens' remarkable consistency, but their arrangements sure could use some hobgoblins. That's the impression I got from listening to their ...

The Go-Betweens: Their Back Pages

IS ROCK 'N' ROLL just a fairy tale? Once upon a time there was a magical group called the Beatles. We thought they'd last forever, ...

The Yin and Yang of the Go-Betweens

LIVE, THE GO-BETWEENS may just be the most perfectly balanced rock band around. And it's nice to have a rare chance to witness it. Last ...

GRANT MCLENNAN, who died in his sleep on MAY 6, 2006, was one of the outstanding songwriters of his generation. He was acknowledged an artist ...

DOMINO TAKE a fittingly comprehensive approach to anthologising this rarefied band. The first in a planned three-volume set, it collects the group's first trio of ...

Robert Forster: I wouldn't be able to make sense of Madonna or Drake

AS A NEW Go-Betweens boxset is released, Brisbane's great purveyor of awkward pop talks about turning critic and which of his songs Ed Sheeran should ...

"It's a widely misunderstood song": How the Go-Betweens made 'Streets of Your Town'

Retrospective and Interview by Andrew Stafford, The Guardian, 19 September 2018

Is the winner of Guardian Australia's Songs of Brisbane poll about Brisbane? Even band members aren't sure. ...

The pop star turned author on her memoir of the Go-Betweens drummer Lindy Morrison ...