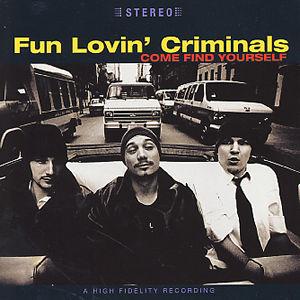 Tonight there's gonna be a jailbreak somewhere in, er, Denmark, as those Fun Lovin' Criminals unload their arsenal of jazz, blues and hip-hop on 90,000 ...

"WHEN WE STARTED, people would throw stuff at us for free. We got $25,000 this time," says Huey, lead singer and guitarist of New York ...

Supermodels on their Ds, Norweigan brandy parties, British pop star girlfriends "kickin' Swedish ass": it's all part of the Fun Lovin' Criminals' life on the ...

From the mean streets of New York to the palm trees of Hawaii, Flipside talks herbs, pasta, cocktails, garlic and garbage with Fun Lovin' Criminal ...

Characters:HUEY MORGAN: Guitarist and frontman with the Fun Lovin' Criminals. Exudes the suss and streetsmarts of Pacino in Serpico or De Niro in Mean Streets. ...

NEW YORK wiseguys get on the laidback lounge-core tip. ...

CONTRARY TO the half-arsed fumblings suggested by their permanently stoned expressions and carefully cultivated image of hapless bums who lucked into a record deal, the ...

Profile and Interview by Tim Cooper, The Independent, 26 August 2005