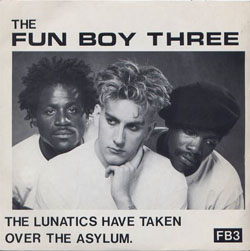 CAST YOUR eyes to the right. You know the gents. That's a walkover. It's the Fun Boy Three. ...

THERE NEEDS to be good reason for breaking up an outfit like The Specials, their heyday happened so fast, ended so soon and was tied ...

"EQUALITY AND democracy were what we preached. That's how it was when we started, but it didn't last. When we started making $2,000 a night ...

Fun Boy Three: Inside The Asylum

NEW YORK — When the Specials broke up, the group split into two camps. Jerry Dammers, the gap-toothed keyboardist who was usually considered the mastermind ...

ON THE surface, these two records seem to have a lot in common. Aside from the fact that the Funboys helped to get Bananarama together ...

This interview with Terry Hall is the result of two rather brief meetings with the Fun Boy, although I'm tempted to suggest that Glum Boy ...