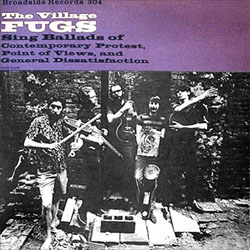 "Two persons were shot dead and several others injured in a gun battle between shoplifters and store detectives in a Bronx supermarket today." ...

The Fugs: Dirty Words Are Hurled At Public

DESPITE THE fact that it is almost impossible to shock people anymore, the bad-word business flourishes. ...

Ed Sanders: We Reach The Moon

YOU GET this sweaty little record company office and you're issued with the regulation afternoon tea or coffee. Danny Kootch looks suitably bloated by both ...

Update, 2020. "Perverted, outrageous, violent, repulsive, ugly, tasteless. A travesty. That's what's good about them". This was a quote about the Rolling Stones, recorded around ...

It could be that I’ve been spending too much time lost within the darkened pages of The Family lately, but more than anything else, this ...

Lookin' Back at The Fugs

... a word of thanks to the guys who made all this decadence, vulgarity and debauchery possible. ...

The Fugs: Fugging around

Widespread, commercial appeal was never high on the Fugs' list of priorities. ...

Live Review by Jim Sullivan, The Boston Globe, 2 May 1988

THE FUGS – prime satirists of the hippie era, a band resurrected sporadically for live dates in this decade – are on stage, about to ...

DECEMBER 16, 1965. A press conference is under way at Columbia Studios, Los Angeles. Bob Dylan is holding court. One reporter throws a question: "What ...

Ed Sanders and the Fugs

EARLY 1965: The Charlatans were about to galvanise California's acid rock revolution at the Red Dog Saloon, Jimi Hendrix was still playing R&B standards on ...

The Fugs: Tenderness Junction and It Crawled Into My Hand, Honest

Underground, overground: two subversive major label salvos from New York's folk-punk-poets. Of their time, sure, but still worth yours. For an underground band, in their ...

The Fugs — Suppose They Gave A War And Nobody Came?

"KILL FOR PEACE" ironists The Fugs have reunited after 27years and are "preparing to go out in a blaze of leaflets". ...

The Fugs Levitate the Pentagon

NOT IN HIS wildest imagination could David Copperfield have dreamed this one up. Levitate the Pentagon, America's stark and forbidding Defense HQ, 300 feet skyward, ...