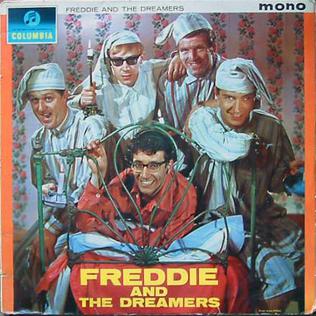 Freddie & The Dreamers: The Hilarious Account Of How Freddie 'Floated' From Milk To Hit

MR. FREDERICK GARRATTY has it all worked out exactly when he became just plain Freddie, a full-time professional entertainer with a backing group called the ...

Freddie, of the Dreamers, has a Weakness for 'Birds', Fruit and Squash

FREDDIE GARRETTY ordered a glass of orange squash, six dishes of fruit salad, and confessed that two items share the number one spot in his ...

June Harris watches a new Freddie and the Dreamers, session, and talks to Mitch Murray

Freddie and the boys have a ball in the studio ...

THERE ISN'T enough room to swing a mouse in Freddie and The Dreamers' dressing room at the Chester Royalty, what with costumes lining the four ...

Report and Interview by Peter Jones, Record Mirror, 1 May 1965

Manchester's musical conquest of the States, by Peter Jones ...

PERHAPS HOPING to capitalize on the nostalgia fever that has made the recent Monkees tour a success, five acts that got their start during the ...

Flight of the Conchords, the Bonzo Dog Doo Dah Band and other pop comedy acts

Overview by Robert Sandall, The Sunday Times, 25 May 2008

It's business time for pop comedy again – but why now? ...