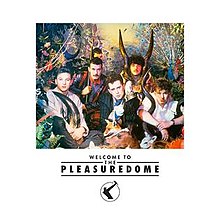 Rutherford talks about the end of Frankie and life after, his move into dance music and clubbing, and working with ABC.

THAT A GROUP should make the fourth-best selling British single of all time with their first release is remarkable; that they should follow it up ...

ZTT: Who Bridges the Gap Between the Record Executive and The Genius? Me

PAUL MORLEY, the man who took FRANKIE GOES TO HOLLYWOOD to Number One, takes a long day's journey into night where he wonders whether he ...

They've become the most notorious British group since the Sex Pistols. Now they're dressing up in army uniforms to promote their new single – "a ...

Frankie Goes To Hollywood are what's been happening while we've been away. They've been at Ho. 1 with 'Two Tribes' and at No.2 with 'Relax'. ...

Into Battle: Declaring War On The Pop State

IAN PENMAN goes over the top, typewriter at the ready, and asks, Can one speak of the state of pop without protecting the interests of ...

ZTT: The Morley & Horn Show present How To Make A Spectacle of Yourself

The first year of ZTT has been a spectacular success, with Frankie Goes To Hollywood singles 'Relax' and 'Two Tribes' becoming respectively the fourth and ...

Pedro, Nasher and Mark are not quiet types. "Getting absolutely bladdered and smashing the place up" is a little more their line. That and slagging ...

Frankie Goes To Hollywood: Welcome to the Pleasure Dome

IT IS, of course, brilliant. And nothing more so than the last glittering shards, the final breaths taken in this pleasure dome. ...

Frankie Goes to Hollywood: Welcome To The Pleasuredome (Island)

The American Dream: Frankie Goes To America, The Diary

Max Bell joins Frankie Goes to Hollywood for a week of high excitement on the road in the U.S.A. ...

HOLLY JOHNSON keeps himself to himself for much of the tour. ...

Frankie Goes To Hollywood: Welcome To The Pleasuredome (ZTT)

SOME THINGS just aren't worth getting upset over, and this album is one of them. ...

WELL, HOLLY Johnson, lead singer of Frankie Goes to Hollywood, would use a more explicit four-letter word than buzz to express his feelings toward anyone ...

Relax, It's Only A Rock Group: Frankie Goes To Hollywood

Profile and Interview by Max Bell, The Times, 14 February 1985

CARL GUSTAV JUNG, in one of his lighter moments, once wrote: "Liverpool is the pool of life". A year after Jung's death his words were ...

"I HAVE NOTHING to say — read my books" is Andy Warhol's standard riposte to most would-be interviewers. David Yarritu — a former assistant of ...

HAVING TENACIOUSLY eschewed the medium of live performance as a factor in their rise to ministardom, Frankie Goes to Hollywood now find themselves hoist by ...

Report and Interview by Helen Fitzgerald, Melody Maker, 25 May 1985

Finally, FRANKIE relaxed and invited Helen FitzGerald to chase them round picturesque Montreux. So what did happen in that brothel in Frankfurt? What do Frankie ...

WHAT DO you do when you've made a completely excessive double album which made history as highly moderate filler? How do you feel when everyone ...

The Revenge of Frankie Goes To Hollywood

"NO ONE GETS IN HERE!" screams Brian Nash, slamming the caravan door and flicking the lock. "No one!" Outside hover a few members of the ...

WITH A LITTLE help from his friends, Frankie went to Number One. He found that Number One was more exciting than Hollywood ever could be. ...

MR HOLLY Johnson is right, shooting stars never do stop, more's the pity. Instead they tumble entropically to the back of beyond, hollering, hooting and ...

Report and Interview by Adam Sweeting, The Guardian, 18 January 1988

When two tribes go to war... As the Great Frankie Case ends, MICHELE KIRSCH talks to the victorious HOLLY JOHNSON ...

ON WEDNESDAY 10 February, the usual knot of press photographers and television camera crews on permanent point duty outside the Law Courts in The Strand ...

AS LUNCH DATES with professionally outrageous people go, mine with Holly Johnson — upstairs and upstairs again at L'escargot — was an affair of studied ...

Frankie Goes To Hollywood: Where Are They Now?

THERE ARE FEWER more meteoric sagas than that of Liverpool's Frankie Goes To Hollywood – from almost complete obscurity to the hottest, and the most ...

Holly Johnson: A Life Of Johnson

Diagnosed as suffering from an AIDS-related illness, Holly Johnson decided to write his life story before the tabloids did it for him. ...

Frankie Goes To Hollywood, Art Of Noise et al: A Force From Above

Profile and Interview by Paul Lester, The Times, 11 October 2009

Paul Lester remembers the two years when the band ruled the world ...

SURELY, BY NOW, there should be a commemorative blue plaque on the central reservation of Princess Avenue in Liverpool's Toxteth. ...

Frankie Goes To Hollywood: Welcome To The Pleasuredome Vinyl Icon

IT STARTED in jail. In the spring of 1982, Mark O'Toole, bassist of fast-emerging Liverpool band Frankie Goes To Hollywood, was jamming on a new ...

Beyond the Pleasuredome: Frankie Goes to Hollywood's Liverpool

Wyndham Wallace follows last year's celebration of Frankie Goes to Hollywood's landmark album, Welcome to the Pleasuredome, with a look at its neglected follow-up, Liverpool, ...

It's easy to forget how big an explosion Frankie Goes To Hollywood caused in the '80s. Rob Hughes peers through the cracked windows of the ...