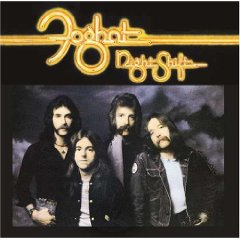 NOBODY LIKES Savoy Brown except everybody. Why? What? Well, you know, you either like 'em or ya don't. If you do, you got no problems. ...

THAT'S FOGHAT, not Hogfat. And not Savoy Brown either, although with Lonesome Dave Peverett and Roger Earl in the lineup, one might see Hog – ...

I WALKED IN late, so for all purposes Foghat were the opening group. People take their album seriously because Dave Edmunds was involved with it, ...

Report and Interview by Jim Esposito, Zoo World, 10 May 1973

2013 NOTE: A big Savoy Brown fan back in the day, much as I loved the group's transformation which produced Street Corner Talking I was ...

THE BIGGEST FACTOR preventing the spread of glitter rock in America is the persistent popularity of blues, particularly in the form of its degenerate offspring, ...

THUFFERING THUCCATASH!! A NEW FROGHAT (or is it Hookfoot?) ALBUM! Man, that's about as exciting as a re-run of Car 54, Where Are You? ...

Profile and Interview by Jon Tiven, Zoo World, 9 May 1974

FOGHAT DELIVERS hard English rock 'n roll with an American accent, and as such they aren't fully appreciated in their native England, where the only ...

For years they've ridden through the badlands of a press blackout, but with an endurance as tough as their extended jams, the British road crew ...