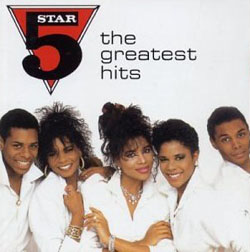 "All Dayers" have been going for years. They're marathon sessions of dancing to reggae and soul records with live appearances from the singers who made ...

Pooh Bear wanders by with a pot of honey on his head! Shoals of artificial fish splash merrily in a nearby lake! Donald Duck sings ...

FIVE STAR are one of Britain's most successful chart acts, but their Dad still keeps them firmly in line. PAOLO HEWITT meets the stars who ...

5 Star: "Like Any Father, I Just Want The Best For My Kids"

No discos. No stepping out with the opposite sex. Arranged marriages a distinct possibility. Is Buster Pearson, 5 Star's father and manager, being a touch ...

Five Star: Between The Lines (RCA)

HANG ABOUT, I'm still picking the lumps of Crunchie from my Hampsteads, still salivating over the last Five Star squalls, still worrying over the way ...

The Star — worran institution! For five years now they have been in the public eye but does anyone know what they're really like? "Er, ...

YOU CAN LOOK back as fondly on the '80s as you like, but the truth is the music back then was as hit-and-miss as it ...