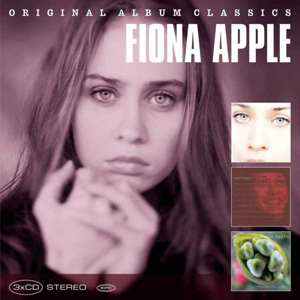 FIONA APPLE is a Manhattan teenager ablaze with songs of love, loss, anger and pain. "Given my way, I'd tie all shrinks together and burn the fuckers!" ...

Turning tears on her pillow into pearls ...

WHEN FIONA Apple pulls into a new town — some place where she has never been before but where tonight there is a theater with ...

FIONA APPLE presents herself as damaged goods, both a woman wronged and a gleeful wrongdoer. That alone sets her above the teen-pop Mouseketeers; makes her ...

Therapised and raped by the age 12, famous and alienated by the music industry at 19, Fiona Apple is feeling better, thank you. She's got ...

FIONA APPLE was born in New York in 1977. She has since recorded with Johnny Cash, dated Paul Thomas Anderson and David Blaine, been a ...

Fiona Apple: The Idler Wheel Is Wiser Than the Driver of the Screw and Whipping Cords Will Serve You More Than Ropes Will Ever Do

THE AUDACITY of the new Fiona Apple album makes me so happy, because I can imagine what went on over at her record company when ...