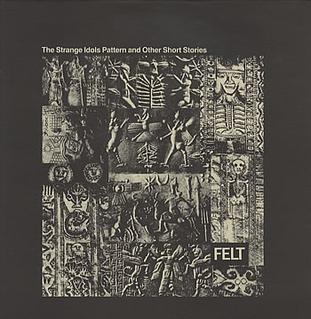 THIS IS getting ridiculous. I'll have to do a heavy metal band soon. You mean you don't even drink? Jon Lawrence said No with a ...

RATHER FRAGILE and stark, Felt played the Moonlight as support to some Godforsaken lacquery crew named Modern English and most of the time looked distinctly ...

Felt: More Than A Feeling

John Scott Wilde in cahoots with Lawrence of Felt ...

THERE IS A singular atmosphere to Felt's music. Their dreamy guitar excursions are a pure extension of mood, not intent, and as such have no ...

FELT ALWAYS make music from a magic carpet. Tonight, though, they had to fight to stay aboard; their starry-eyed, uniquely shy pop constantly mauled by ...

...(ROCK IS dead?) I think we can do better than that. The thing about Felt (which was that they sounded like everyone else) hasn't changed. ...

Felt: Poem Of The River (Creation)

THE MOST FASCINATING aspect of the band Felt is Lawrence's insatiable urge to constantly free-fall the perimeters of his creative ability. ...

FELT, IF NOT a maligned band, are certainly underrated by a great many people, while far less adept '60s archivists like Primal Scream are praised ...

Felt: Too Much Monkey Business

THE RECENT ME AND A MONKEY ON THE MOON LP WAS FELT'S LAST SHOT, THE COMPLETION OF A 10-YEAR PLAN, THE PRE-DESTINED END OF THE ...

WHEN IT COMES TO individuality and wilful peversity, Lawrence's only rival is Prince. In ten years he guided Felt through ten LPs and ten singles, ...

Felt/Denim: There Can Be Only One Lawrence — Meticulous Genius, Confounded.

IN 1986, WHEN Felt signed to Creation Records, stories quickly circulated about the oddness of the band's leader. ...

Killed by Felt: Tim Burgess discusses his love of Lawrence and "Birmingham's best band ever"

Wyndham Wallace takes a road trip from London to Essen, Germany, with a truckload of CDs, LPs, and the unlikely company of the Charlatans' Tim ...

Indie-pop outsider extraordinaire Lawrence — the Felt/Denim/Go-Kart-Mozart frontman who turned 51 last month — talks to Jude Rogers about sounding like Nicki Minaj and his ...