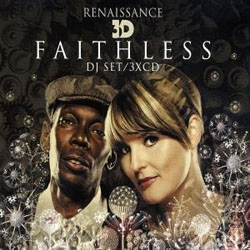 Profile and Interview by Martin Aston, Q, May 1997

Faithless: in no way Eurosceptic. ...

Profile and Interview by Ian Gittins, Melody Maker, 3 May 1997

FAITHLESS are back, bigger, better and bolder than before. They say God is a DJ. He's probably a Faithless fan ...

From Euro-disco trance nutters to Mercury-friendly rock'n'soul pluralists finally getting the respect they deserve — you've heard the word, now come worship in the house ...

She's the first lady of house, he's a living folk legend. She likes gospel, he likes jungle. They are the odd couple and they're taking ...

Faithless: House Of The Holy

One speed demon rapper. One half-deaf DJ queen. And one studio Svengali who just happens to be Dido's brother. This is Faithless, dance music's holy ...

AS THIS COLLECTION of reworked tracks from last year's Outrospective album makes all too clear, Faithless don't wear remixes well. So reliant are their songs ...

FAITHLESS'S SHOWINGS in the singles charts might not bag them as one of the biggest players of the '90s dance boom, but with 10 million ...

Faithless: To All New Arrivals

RECENT YEARS have not been kind to the 1990s megaclub generation. However, despite frequently threatening retirement, London-based collective Faithless have proved as difficult to shift ...

Faithless: how we made 'Insomnia'

"MTV FORCED US to change the first line. It was originally: I only smoke weed when I need to" ...