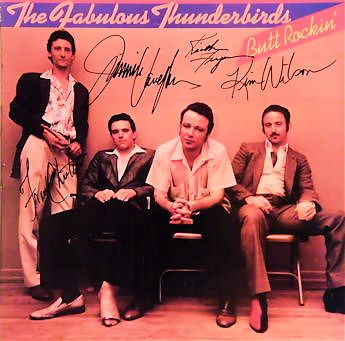 IT WILL not have escaped your attention that America is one beast of an extensive country. As far as it concerns rock and roll music ...

Playing R & B isn't a passport to instant fame and wealth. The Fabulous Thunderbirds play R&B that makes everyone go wild. JOHN PIDGEON caught them in ...

"I'M REALLY good at this kind of thing." said Kim Wilson. "Broken hearts or broken legs, they're all the same to me." He jabbed a ...

The Fabulous Thunderbirds: The Good Word

The Fabulous Thunderbirds: They're Tearing It Up Again!

THIS IS WHAT we call the irresponsible rock crit at his worst, enjoying the company of the band he's talking to so much he doesn't ...

I SUPPOSE it’s a good time for these sons of America to renew their acquaintance with these shores ("Hi, shores!"), since every other denizen of ...

FROM RIB JOINTS TO MOVIES, THE T-BIRDS MAKE IT TOUGH ENOUGH ...

DO YOU have any aliases? KIM WILSON (vocals, harmonica): I was Galita Slim once, as in Galita, California. And I was also Chesterfield King. ...

The Fabulous Thunderbirds: Tuff Enuff, Were They Actual Meat

THESE ARE THE best and worst of times for the Fabulous Thunderbirds. After 14 lean years and four commercial flops, the Austin, Texas-based critical darlings ...

The Fabulous Thunderbirds: Walk That Walk, Talk That Talk (Epic)

IT'S HARD TO imagine the fabulous Thunderbirds without founding member Jimmie Vaughan. ...

My Lunch with the Blues Guys

IT'S NOT NEWS that Kim Wilson of the Fabulous Thunderbirds is a good harmonica player. But he also cuts it as raconteur with stories about ...