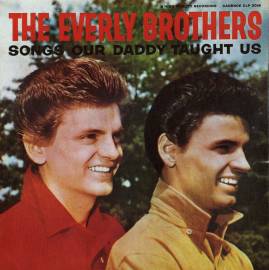 The Everly Brothers: Songs Our Daddy Taught Us

IN A QUIET sort of way, 1975 saw an Everly Brothers revival of sorts. Warner Brothers released their magnificent Walk Right Back With The Everlys, ...

Half of the great duo talks about his new solo album, Phil Everly: being produced by Stuart Coleman and working with players like Mark Knopfler and Pete Wingfield; working with Christine McVie, and memories of meeting her in the '60s. Then he talks about an upcoming Everly Brothers reunion after 10 years apart: how it'll work, his relationship with Don and possible plans.

Phil Everly: He Can't Spell But He Can Sing Like A Million Dollars

From MAUREEN CLEAVE in London ...

PALE AND drawn after his four week tour of Britain without brother Don, Phil Everly slumped into a deep armchair in his dressing room at ...

Phil And Don Everly Put Up A Fight

NOBODY could say the fortunes of the Everly Brothers have been at their highest just lately, but the boys are determined to put up a ...

The Everlys and Those Anti-Pop People

I WAS SITTING in the hotel lobby reading some holiday travel brochures when Don Everly joined me. "Hey — where's that?" he exclaimed. "Corsica? Sure ...

Most Fantastic Show Ever! ...

I SUPPOSE you could have called the act the Rolling Everlys — or the Stones Brother! But whatever the name, there's no mistaking the terrific ...

"WE'RE looking so much forward to going back to Britain," exclaimed Don Everly on the phone from Decorah, Iowa, to my office in California. "We're ...

THAT GREAT US duo, the Everly Brothers, made their first London appearance last Saturday, at the Finsbury Park Astoria. In black evening dress the Everlys ...

Marvin Gaye Is The Nicest Tamguy

MARVIN GAYE has got to be one of the nicest performers to come out of Motown headquarters in Detroit, which is famous for sending out ...

The Everly Brothers: An Interview with Don

Interview by John Tobler, ZigZag, May 1970

THE EVERLY BROTHERS first single 'Bye Bye Love' was released in 1957 and their records have been consistently good since then. Don Everly, now 33, ...

New Albums from the Grateful Dead, Eric Clapton and the Everly Brothers

Sing Me Back Home: Don, Phil and the Everly Brothers

Report and Interview by Philip Norman, The Sunday Times, 1972

PHIL IS THE fastidious one. Don was happy to stay at another motel with a northern draught sweeping its gallery and cows grazing round the ...

The Everly Brothers: Back In Favour

JUST WHEN we were getting used to thinking of the Everly Brothers as a monument to a distant era they come up with Stories We ...

LIKE MOST under 40/over 20 Americans, the Everly Brothers are very much a part of my life. 'Cathy's Clown' and 'Bye, Bye Love' are not ...

The Everly Brothers: Stories We Could Tell

THE EVERLY BROTHERS brought harmony to rock and roll. They also brought sensitivity, the result of their having been weaned on old-time country music. They ...

Looking Back with the Everlys

Retrospective and Interview by John Tobler, Let It Rock, December 1972

SOME OF THE earliest rock’n’roll to capture my imagination was purveyed by the Everly Brothers. "Whatcha mean?" mutters a Brylcreem-encrusted voice, emerging from a Neanderthal ...

IT'S ALMOST eleven years since the first serious rumours suggesting the breakup of the Everly Brothers appeared. What with that, and a much-noted coolness between ...

THE EVERLY BROTHERS – Don and Phil – first emerged in the rock 'n' roll market in 1957, with a unique harmony-vocal sound, a modern ...

Jimmy Page Gives The Interview Of His Life

You had to half-close your eyes, but then it all came back: 1958, The Perry Como Show, two boys with strange faces, perfectly greased quiffs ...

Devoted: The Everly Brothers at the Royal Albert Hall

THERE'S THIS certain tension which exists between the Everly Brothers that is the genius of their music. It's as if the lyrics of such as ...

THANKFULLY THIS is not as I had feared – yet another yawn-provoking paste-up job, fashioned merely to cash in on the Everlys’ recent reunion tour, ...

SUPPOSEDLY, it was the richest deal in the history of the record business when it was announced in November 1959. ...

An Everly Brother In Winter: Walkin' Right Back with Don Everly

Retrospective and Interview by Colin Escott, 'Tattoed on their Tongues' (Schirmer), 1998

WHEN ROCK 'N' ROLL ARRIVED, it triggered a three-alarm anxiety attack in Nashville. Many hoped that they would wake up one morning to find it ...

FOLLOWING THEIR bleakly festive 'Christmas Eve Can Kill You' single, Will Oldham and Dawn McCarthy return for an album-length exploration of the Everly Brothers’ songbook. ...

I PROBABLY FIRST heard the Everly Brothers when I was a real little kid about six or seven, playing in the driveway behind my family's ...