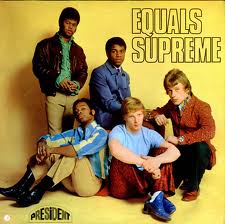 Eddy Grant talks about forming the Equals with school friends in Tottenham; their hits 'Baby Come Back' and 'Black Skin Blue Eyed Boys'; his heart attack, and leaving the band; contractual issues with manager Edward Kassner, and regaining his copyrights; building his own studio; dying his hair white; his solo albums, and hits 'Walking on Sunshine' and 'Living on the Front Line'; moving to Barbados and building his Blue Wave studio, and about his sporting heroes and friends.

The Equals: Everyone Should Be Drafted Into Pop...

THE GROOVY Francis Bacon, sixteenth century writer extraordinary, once said: "There is little friendship in the world, least of all between Equals". But the groovy ...

I HAVE NEWS for groups and singers who consider it's always necessary to do about 50 "takes" before they get their records to the right ...

Equals Stunned By No. 3 Hit

EVEN THE Equals can't believe an old half-forgotten track like 'Baby Come Back' could have boosted them from nowhere right up into the big money-earning ...

THE INHABITANTS of the MM's Fleet Street HQ are pretty used by now to witnessing the more bizarre manifestations of Britain's pop scene. ...

ROLLING STONES: 'Honky Tonk Women'/'You Can't Always Get What You Want' (Decca). An important single for the Stones, but a disappointment for us . ...

'Black Skins' Could Be Equals' Biggest In The States

LEADER-SONGWRITER Eddie Grant lives and breathes the Equals, whose fat, pumping 'Black Skin Blue Eyed Boys' single is at No. 19 in this week's NME ...

Eddy Grant: A Reggae Popster Makes His Own Breaks

REMEMBER D.I.Y.? Remember all those fierce and earnest punk rockers who vowed to bypass the corporate monopoly and conquer the rapidly devolving Western world? It ...