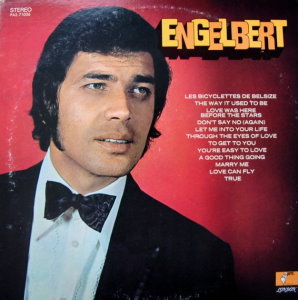 Blast-off for THE big four is this Friday — Here's Disc's curtain-raiser by the stars themselves ...

A show which proves pop still has something up its sleeve ...

Engelbert replaces Ken Dodd as idol of the mums ...

Engelbert: from dawn till dusk

ONE SLEEPY eye topped by tousled black hair raised itself from under the bedclothes and a voice said: " Ho, lads, we sail on the ...

Review by Gary Pig Gold, In Music We Trust, August 2001

CAUTION: EVEN THE most self-respecting of record stores now house a section way in the back, between the Soundtrack and Male Vocalist departments, called "Lounge." ...

Backstage in the '60s

LIFE BACKSTAGE AT pop shows in the Swinging '60s was always a hoot. Looking back, it's fun to recall how casual and relaxed it all was ...