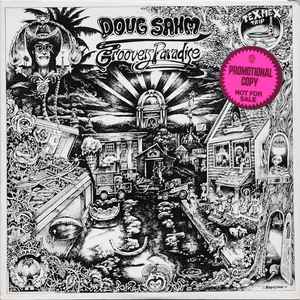 DESPITE WHAT some people may say to the contrary, the most significant thing about it is NOT the fact that Bob Dylan crops up for ...

THEY DON'T SAY so on the jacket, but this is The Doug Sahm Showcase, featuring the former leader of the Sir Douglas Quintet paying homage ...

HI, WELCOME to 1973! (You’re probably used to it by now, but this was written in January) It’s gonna be a banner year for rock’n’roll ...

HERE'S A TEASER for you to masticate the ole' brain molecules on: pretend you're a big record corporation and you've got these two acts, one ...

Doug Sahm: Arise, Sir Douglas is Blowing Up A Storm

THE FUNKY SOUNDS of 'Texas Tornado', Doug Sahm's latest single, blasted out of the stereo in the office of Atlantic Records' co-ordinator of A&R, Mark ...

OL' UNCLE Doug sure is a goodtimer. Take a whole chunk of that Johnny Rivers Boogie Band feel, dilute with a touch of pure Mike ...

DOUG SAHM'S LAST album, Doug Sahm And Band on Atlantic Records, was one of the very finest bits of squashed vinyl of 1973. Sahm's band ...

MARTIN HAWKINS uncovers the Tex-Mex mix that gives the roots to the San Antonio sound. It's time to discover the music of Sahm, Fender and ...

THE LONG Ryders, Lone Justice, Blasters and the rest? Forget ‘em! Sir Doug has returned to show these punks how good "rock and roll from ...

YOU'D NEVER KNOW it from the history books, but San Antonio had an incredibly vital rock scene in the late 1950s and early '60s. ...

LIKE DR. JOHN in New Orleans and Paul Butterfield in Chicago, Doug Sahm was a white kid whose musical curiosity led him to the wrong ...

Retrospective and Interview by Bill Bentley, Austin Chronicle, 23 May 2003

DESIGNATED DRUMMER. IF YOU'RE GOING to hang a tag on the able shoulders of Ernesto "Ernie" Durawa, that would be the one. For almost 50 ...