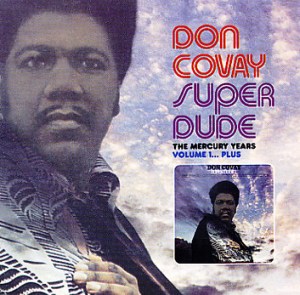 DON COVAY is another of the American soul singers at present on our shores. ...

Are You Reggae For Don Covay?

AMERICA JUST had to catch on to reggae. After all, the roots of Jamaican music lie in the '50s out-put of Fats Domino, Smiley Lewis ...

THERE MUST be some crap music coming out of the States, or is it me? Can't I discern between the good, the bad and the ...

Super Dude? It sounds like this year's version of Muddy Waters' 'Hoochie Coochie Man' or Pickett's 'Midnight Mover' but where those men defined love as ...

DON COVAY is a permanent fixture in the music of this era. ...

THE BIGGEST MISTAKE Don Covay made with this album was in making 'It's Better To Have' track one, side one. ...

DON COVAY'S resurrection as an artist was one of the brightest events of last year. His 'It's Better To Have' made number 21 in the ...

BEHIND THE front line of acknowledged soul stars, the Stevies, Arethas, Al Greens of the day, has always lurked a second league of creative talent; ...

AN APPRAISAL OF THE VIRTUES OF MR. DON COVAY ...