The Disposable Heroes of Hiphoprisy 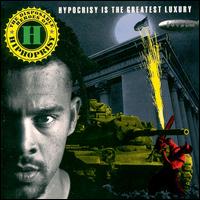 Loudmouths: The Disposable Heroes Of HipHopRisy

It grew out of raw anger. Can rap turn politically correct? ...

Report and Interview by David Toop, The Face, February 1992

Rap music has become less experimental, but on America's West Coast, groups like The Disposable Heroes Of Hiphoprisy and New World Rhythm are trying to ...

Disposable Heroes of Hiphoprisy: Telly It Like It Is

Prime your remote controls for the anger and eloquence of powerful San Franciscan panthers of polemic rap, THE DISPOSABLE HEROES OF HIPHOPRISY, telling it like ...

The Disposable Heroes Of Hiphoprisy: Hypocrisy Is The Greatest Luxury (4th & Broadway/All formats)

GREATEST AMERICAN HEROES – In-Disposable! Rono and Michael take their message to the streets ...

The Disposable Heroes of Hiphoprisy: Axe of Faith

THE DISPOSABLE HEROES OF HIPHOPRISY don't piss about like most groups who claim to be 'political'. The Disposables just get on down and do something ...

CHANNEL ZERO. Middle-class family with airbrushed children steps out of a Volvo. Mother takes one look at me and shouts "You need Jesus!" Torn between ...

Back in 1985, one seemingly harmless song led a woman to take unprecedented action against the American recording industry. Thanks to her moral crusade, albums ...

A Q&A With Michael Franti

MICHAEL FRANTI has been one of the most consistently insightful, incisive, and intelligent voices in politicised pop music for almost 15 years now. ...