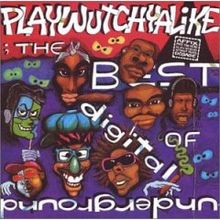 "LOTS OF PEOPLE have said we're similar to De La Soul simply because we're with the same record company in America and we both have ...

California's DIGITAL UNDERGROUND have crashed the national charts with their first single 'Doowutchyalike', breaking through the walls of Daisy Age hip-hop like a sledgehammer. On ...

Digital Underground are the hip hop band of the future. Freaky, funky, mechanically minded and experimental. ...

WOSSIS? A hip hop concept album? It most certainly is, but before you reach for the barf bag get a load of this concept. Sex ...

Digital Underground Can't Get Over the Humpt ...

YOU'RE TUNED in to the mutant descendants of P-Funk. Digital Underground are updating George Clinton's '70s blueprint to reflect much more worrying times. The larger ...

OVER THE roar of the multicolored cosmic Mothership crashing onto Planet Hip Hop, Digital Underground continue to pray in the wild sound factory of George ...