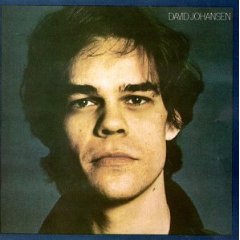 Note: Marty Cerf and I conceived of a series of these for Phonograph Record: I think Iggy may have done Aladdin Sane for PRM. I ...

RIGHT BETWEEN the eyes, pilgrim. Yeah, he does look like Lee Marvin. In walks the supposed progenitor of all this punko nonsense, ex-New York Doll ...

RIGHT BETWEEN the eyes, pilgrim. Yeah, he does look like Lee Marvin. In walks the supposed progenitor of all this punko nonsense, ex-New York Doll ...

Beyond The Valley Of The New York Dolls

THE FIRST TIME I ever laid eyes on the New York Dolls was New Year's Eve, 1972, at the old Mercer Arts Center, and, quite ...

DAVID JOHANSEN should have been a superstar.Imagine... ...

DESPITE A RAFT OF extraordinary songs and some devastating performances, David Johansen has never made a uniformly good record. In fact, listening to Johansen's albums ...

IN AN OFFICE that overlooks Central Park, David Johansen finds the videotape he's looking for, a recording of his New Year's morning show at the ...

BUSTER POINDEXTER WHERE ARE YOU? ...

Buster Poindexter is the cafe incarnation of David Johansen. More than a pseudonym: a happily split personality, an alternate ego, Buster is sometimes surprisingly real. ...

The Strange Case Of Buster Poindexter

"WHY YA GONNA write this for CREEM?," rasps David Johansen in that gravelly Noo Yawk slang his alter ego Buster Poindexter has put to such ...

David Johansen’s Journey Through the Past

Between songs the occasional, almost plaintive, yelp can be heard: "‘Subway Train’!" "‘Funky But Chic’!" One particularly persistent voice calls for ‘Babylon’, of all things, ...

DAVID JOHANSEN sits on the couch in the living room of his wife's long-time, walk-up apartment on a nondescript block of Manhattan's Upper West Side. ...