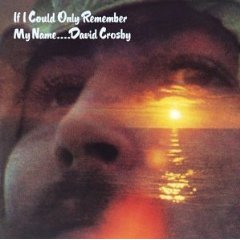 The Cros talks about the new vibe of co-operation between musicians, Monterey, the disintegration of Haight-Ashbury, seeing Cream play the Fillmore the night before, and all kinds of other fine stuff

The Cros talks about his biography, Long Time Gone (co-written with Carl Gottlieb), his years of addiction and rehab, friends Mama Cass and Graham Nash, and looks back at Woodstock.

Monterey Pop Festival: Inside Looking Out

BEAT: Just wanted to get your comments on what's happening here in Monterey this weekend. ...

Dave Crosby: If I Could Only Remember My Name (Atlantic)

DAVID CROSBY SOLO: WITH MANY FRIENDS! ...

IT STARTED with trademark objects, really. When The Byrds got their hit with 'Mr Tambourine Man', Jim McGuinn established himself as the one with those ...

THE FIRST thing you notice is the twinkle in his eyes. That is the clearest signal that David Crosby is, indeed, back among the living. ...

This is a transcript of John's interview. Listen to the audio here. ...

David Crosby: A Hippy out of Hell

David Crosby is back with an album and autobiography. He talks to Adam Sweeting ...

THE AGING MUSICIAN sits in his hotel room, an acoustic guitar propped upon his considerable paunch. He tosses back his long, greying hair, fingers his ...

THE FORMER BYRD RECENTLY TOURED EUROPE WITH CROSBY, PEVAR, RAYMOND – RAYMOND BEING HIS SON JAMES, WITH WHOM HE WAS REUNITED IN 1995 – TO ...

Over the past 40 years David Crosby has done it all, from crafting transcendental, psychedelic harmonies for the Byrds and CSNY to living a life ...

UP ON THE fifth floor of Warner Brothers Records, David Crosby and James Raymond are embracing each other as if they haven't seen each other ...

David Crosby on If I Could Only Remember My Name

IF I COULD Only Remember My Name, David Crosby's 1971 debut solo album sits high on a hill, shining brightly, and quite alone in the ...

Producer and manager behind the Byrds ...

David Crosby: "The FBI scare me more than Hell's Angels"

The legendary songwriter on Janis Joplin, being "the voice of cosmic America" and Croz, his first solo album in 20 years.   ...

AUTHOR'S NOTE: This is the original unsubbed version, as submitted to the magazine. ...

From early 1960s gigs with Terry Callier and having a song covered by Miles Davis to latter-day collaborations with Snarky Puppy and Steely Dan's Donald ...

MY GOOD FRIEND Johnny Rogan, who died unexpectedly in January aged 67, was among the most prolific and acclaimed music biographers of his generation. Much ...