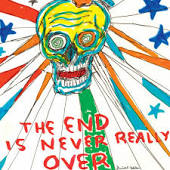 Daniel Johnston: Hi, How Are You (Homestead Records)

HOMESTEAD'S DECISION TO release this album, after Blast First decided to drop it at the 11th hour, has generated a lotta interesting correspondence. ...

"EVERYTHING is so much better/Now that we are back together/I did what I had/To make you mine" ('I Feel So High') ...

TEN YEARS AGO Daniel Johnston roamed the streets of Austin, Texas, passing out cassettes of his homemade songcraft to just about anyone he encountered. Someday, ...

Irwin Chusid: Songs in the Key of Z – The Curious Universe of Outsider Music (A Cappella)

BECAUSE ROCK HAS always been about capable amateurism, it's only logical that a certain kind of rock fan prizes outright incompetence. ...

Use Your Delusion: Daniel Johnston: Fear Yourself (Sketchbook) ****

A Brilliant Mind: The Strange Art and Stranger Personality of Daniel Johnston

Profile and Interview by Paul Williams, The Word, July 2003

A SINGLE INSPIRATION might carry an artist through a whole album, maybe two if he's lucky. But it takes a character as singular as cult ...

An Outsider's Songs of Pain and Longing: Daniel Johnston

LOCKED ON his own in an Xfm recording booth, Daniel Johnston casually flips through the weathered ring binder that holds his songbook and begins to ...

IT HAS TAKEN 25 years, almost as many albums and a lifetime of loneliness and pain, but Daniel Johnston is finally emerging from underground cult ...

Daniel Johnston: "I know the darkness"

Profile and Interview by Laura Barton, The Guardian, 21 April 2006

"I love that girl so much I can't get enough of her crazy love" ('Crazy Love', Daniel Johnston) ...