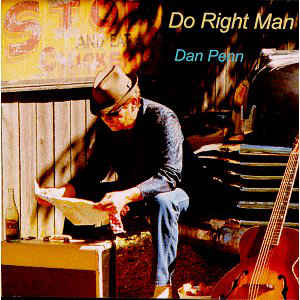 A short chat with the country-soul legend, talkin' about writing 'Cry Like A Baby', producing the Box Tops and the sadly MIA Eddie Hinton. (Chipping in with occasional comments: Dan's wife Linda...)

DAN PENN WROTE his first hit ('Is A Bluebird Blue?' for Conway Twitty) at fourteen, and collaborated prolifically with Spooner Oldham, turning out mid '60s ...

Cheatin' Meeting of Minds: 'The Dark End of the Street'

"THIS IS probably one of the greatest songs that's ever come out of black American music," announces Ricky Ross over the piano intro to Deacon ...

IF THE RACIAL history of the American South was a book, it would be a tragedy - but not without inspirational chapters about black and ...

Dan Penn: A Career Made of Being Where He Doesn't Belong

DAN PENN is propped against a graffiti-covered wall in Harlem. The photographer motions to him and Mr. Penn responds by pushing his sunglasses down and ...

Dan Penn: Once More With Feeling

THERE WAS SOMETHING funky happening in the American South in the late ‘60s and you didn’t know what it was, did you, Mr Jones? ...

Muscle Shoals: Soul of the South

Muscle Shoals and Fame Studios are synonymous with the golden era of soul music. But the musicians who wrote and played on the songs that ...