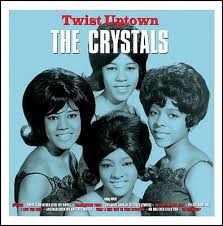 The Crystals: New to the Charts — Six Girls With Two Names!

SO VAST is the American disc scene that quite often an artist or group can get high into the charts without anybody here knowing much ...

Rumour Has It That The Crystals, Bob B. Soxx And The Blue Jeans, And Darlene Love Are In Fact One Group. Here Are The Facts... ...

The Crystals: Now There's Only Three They're Still Looking For A Fourth!

THREE CRYSTALS, and wearing very offbeat outfits, sat grouped on an American type put-u-up in a huge apartment on New York's fashionable East Side. At ...

The Ronettes hit and Phil's flips

BACK IN 1958 Estella & Ronnie Bennett bought a disc between them called 'To Know Him Is To Love Him'. So did their cousin Nadra ...

Now the Ronettes... get the girls screaming, too

Profile and Interview by Maureen Cleave, The Evening Standard, 11 January 1964

IT WAS A bad idea, perhaps, to interview them in a canteen. A great number of suet rolls and custards never got digested that day ...

Phil Spector: Fifteen hits in a row — and if that's not genius, well what is?

Profile and Interview by Maureen Cleave, The Evening Standard, 25 January 1964

THERE WAS a time when Phil Spector would have been Beau Spector and the rage of Bath. His clothes alone would have made him famous. ...

ONE OF the mystery men of the U.S. recording scene is currently here in Britain following the interests of his artistes. His name is Phil ...

Crystals Aim To Hit All Our Shops

WHAT A wealth of talent the Crystals have, and how the four young American gals displayed it to their first-ever British audiences at the Coventry ...

The Crystals' Story: Their Sound, Their Career And Their X-Certificate Disc

Norman Jopling talks to the group with the hottest U.S. hit sound ...