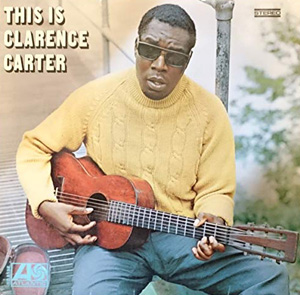 IT'S BEEN three years since a soul tour of such importance has been to Britain. Then, in the spring of 1967, it was Otis Redding ...

WHEN WE heard the good news of Clarence Carter's impending marriage to his protege, Candi Staton, we felt we had to get in touch with ...

Clarence Carter: Am I A Bit Of A Fraud?

CLARENCE CARTER is beginning to think perhaps he's a bit of a fraud! So many people are rushing out to buy his first British hit ...

OWN UP, all those who didn't give Clarence Carter's 'Patches' even an outside chance of making the U.K. charts; let alone actually make the Top ...

Slippin' Away With Clarence Carter

SAN FRANCISCO – Clarence Carter leaves his Holiday Inn room on the arm of his road manager, who looks familiar. It's Rodgers Redding, and it's ...

Where Are They Now? Clarence Carter

Dr. Carter To You

CLARENCE CARTER decided to challenge himself last year and hit the jackpot with the best-selling album of his career. ...

Clarence Carter: I Caught You Making Love: The ABC Years

SELF-TAUGHT ON guitar, formally trained on piano, a gospel church-bred singer, Clarence Carter combined a bluesman's flair for storytelling with a frankly lusty take on ...